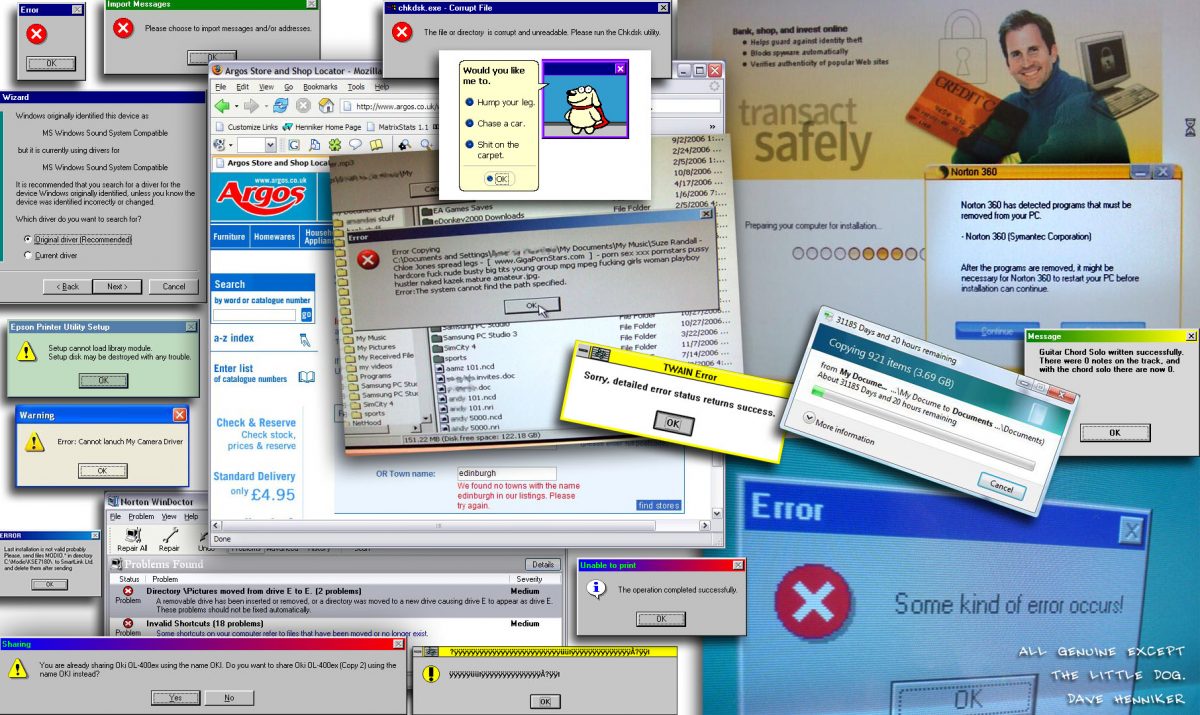 I first created a page with the same title, probably in 2003. In 2018 I’ve made this WordPress version. I retired in 2009 so reworking this has been a nostalgia trip for me. Earlier years were spent working as a TV engineer and interesting recollections are at The Telly Man page.

Search limits to matches found. Click Load More if it appears.
All dialogue boxes are genuine except the one with the wee dog. These were captured from customers' PCs when I worked as a technician in PC World's in-store PC Clinic at Kinnaird Park.
Comet estate car in 1979 photographed at Lasswade. For 17 years I visited customers at home and fixed their TVs, VCRs, stereos and microwave cookers. See The Telly Man page for stories.
My first job with computers was at DCS where I worked on and off from '91-96. I created some 3D animations for DCS, two of which are next in the sequence.
It was great fun modeling this and adding the lights.
My first work bench at DCS
I got quite creative then, fooling with a very early version of 3D Studio.
DCS made me redundant, I was unemployed, went to Microcom & Control Training under a government Training for Work scheme to extend my dole money - then DCS took me back again under the training scheme - training to do my original job but for a greatly reduced wage! My second job with computers was at Blue Chip. I worked for Blue Chip from 1996 to 2000 until the business failed. Across the road at the Drum Brae roundabout was PC World...
Sadly, I've little to remember Microcom Training by - no photos and only that scanned pearl of wisdom above. I added the underline to highlight the misspelt 'receive' but that's all. I remember a Spanish girl called Mayte - and a local dude who did small removals as well as a really cool in-house 'zine for the punters, printed on a dot matrix printer. Control Training was in Broughton Road and the trainer was called Rizal (anagram of Rizla) from Bangladesh. he was pretty good and knew his stuff. We learned programming in C and word processing.
The BlueChip manager being presented with a well-deserved Investors in People award. Working here was very nice and a totally different world from the World to come. I had lots of bench space and rarely needed to speak to the public - that's what we had a receptionist and a secretary for.
A very early Photoshop job on colleague Harry W.
Another very early Photoshop job on colleague Harry W. Apologies to R.Crumb
Blue Chip as seen from across the road from the PC World corner (beside McDonalds).
In its death throes, photographed from a bus.
A computer repair company and a florists - not a recipe for success.
PC World's advertisement in the local paper stated Mature applicants welcome which was good because I was already 56 years old. I went to Portobello Job Centre, did a fairly basic technical test and was interviewed and got the job. The company paid for all of us successful applicants to attend the King James Thistle Hotel at the top of Leith Walk for training. The food was good. Later we also attended the Kings Manor Hotel to finish our training.
These are the three main jobs I had in the Service Industry. All jobs were largely trying to work with stuff that you can't actually grasp - electricity (but you can feel it) and digital data (which is a good thing but a mystery to most).
Tech Disc front-ends I did at PC World
My Tech Discs would Autorun in Windows, or you could boot PCs with it - in which case you'd have to press Escape to dismiss the warning message and reach the DOS-based menu.
Largely for my own amusement I designed PC Desktop images for various computers in the PC Clinic
Motherboards modeled
A wireframe version of the motherboards image
A strange overhead depiction of the PC Clinic's layout

[The following was written before cellphones and tablets became established]

More and more, computers are part of our lives. In just a few short years the home computer has changed from being a specialist item into something few people can function without. Convergence is a term bandied about as the home computer evolved into a home entertainment system and much more.

PC service technicians are well aware of the trend for people to store their lives on their hard disk. Tech guys spend ever more time and effort trying to reunite computer users with their data, whether it be photos of family and friends, holiday snaps, important documents or a vast collection of movies or music.

Most people can’t get to grips with something so nebulous as computer data or software. Many have blind faith that the photos they’ve transferred onto the PC will always be there.

One of the worst computers to rescue data from is the family PC with several users – especially if they’re teenagers or naive 20-somethings. A typical scenario is that there’s, say, 4 users but a dozen user accounts because people have screwed up their original user accounts with careless use of dodgy file sharing. Some of them will think it’s really cool to misspell their name with upper and lower case characters and symbols from Character Map.

So in the Documents and Settings folder or equivalent, there will be lots of folders with users’ names and in these folders there will be data to be recovered, or there may be nothing at all except Windows defaults and sample picture and music etc. But you’ve got to look to see. And you’ve got to look in the various users’ Desktop folders to see if they’ve saved a few gigabytes there.

Poking around in other people’s photos and music collections is mostly mundane and boring but can be quite stressful for technicians who are trying to navigate around complicated folder structures and decide what’s valuable data and what’s not, only to be interrupted by a customer at the counter who’s bought the wrong ink cartridge.

At PC World we never explored customers’ hard disks for fun or amusement. We’ve seen it all before and it’s boring and predictable, apart from which there are too many tasks demanding our attention. In my case it’s all in the past tense since I retired in July 2009.

If a PC fails to boot into Windows then the user is likely to panic if they haven’t backed up all their stuff, thinking it may be gone forever, in a puff of logic – as Douglas Adams might say. There really is no excuse for not having duplicate copies on an external hard disk or flash drive or remote backup service. Why not buy a flash drive for next to nothing, bung your important stuff on it and give it to a friend or family member? Then you’ll still have your stuff even if your house burns down.

Data Recovery and Data Retrieval may appear to be much the same thing, but the former may be free of further charge if a service agreement is active – whereas the latter may be always chargeable. Data Recovery implies a corrupt file structure which an in-store IBAS system running Linux could repair. The license provided by OnTrack and other licensing agreements made this the official method for recovering data.

There’s an abundance of free software out there to retrieve and recover data but it’s not licensed to be used in a corporate environment. My favourite bootable disc was my customised version of Ultimate Boot CD. I’ve seen magazine cover discs with ISOs so readers could burn a bootable Linux CD with CDRW software included. The resultant CD, only 28MB of files, would allow the user to browse files on a broken Windows system and save pictures and music etc to a CDR.

The thing is, lots of PC users haven’t thought of the obvious things like having a look at the big selection of computer magazines in the shops. For some, it’s a moment of divine inspiration (or something) when you swivel round an Eclipse screen and show them the wonders of Google. They’ve had a problem but never thought of looking for the answer online. Instead, they drove miles and queued up at the PC Clinic counter.